For Children, Students and Parents

The first fruits of Suzuki Method™ for Violin in Russia

Posted by Elena Sterelyukhina, Suzuki Violin Teacher RUSSIA on 11 May 2017

The Russian system of music education has a lot of popular festivals and competitions for children of different ages and training levels. They give pupils a chance to get experience of public performance, to learn more about creative work of their peers, and teachers have an opportunity to share their experience and to get in the center of events in the world of music education.

Discovering the Suzuki Method™ - a perspective from Russia

The first time I got to know about Shinichi Suzuki’s method was when I watched a short black and white movie on the TV.  A huge number of little violinists were playing some variations with a lot of inspiration.  I was 14, and doing my piano studies at the school of music.  At that time I do well remember what I felt -  so excited!  I would have liked so much to be amongst these kids by the side of this teacher.

Posted by ESA Administrator on 22 March 2017

On March 18, 2017 a concert was held, entitled "Children of Suzuki - Moscow".
Young stars and students of Teresa Kotlar, Suzuki Piano Teacher, Russia were accompanied by the "Kremlin" Chamber Orchestra 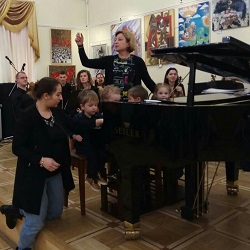 Posted by ESA Administrator on 20 March 2017 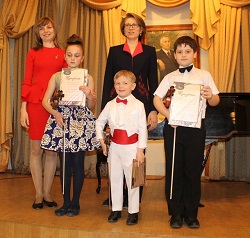 Posted by ESA Administrator on 9 December 2016

A little bit of history was made last month when the first Suzuki Violin exams to take place on Russian soil were conducted in an historic mansion with a great musical history and the home of the International Union of Musicians.  The building is in the historic centre of Moscow and is located opposite the Tchaikovsky Moscow State Conservatory.

Posted by ESA Administrator on 14 September 2016